skip to main | skip to sidebar

Well, we have some exciting news from the Russian front. Thomas and Jimmy Sullivan arrived safely in on Wednesday morning. They toured around Red Square a bit and then took a train to , arriving early Thursday morning. They are staying with an Irishman named Trevor who has been very helpful in getting ideas. He has suggested that we might be able to get a “cultural exchange” visas rather than religious worker visas. These cultural exchange visas would give us a little more flexibility in entering and exiting the country as we need.

Some of you may recall some friends of ours: Bill and Robin Harris. Their daughter Katherine played the piano at our wedding. She was fantastic! But that is another story. Anyway, Robin and Bill have been an invaluable help to Thomas. For example…

On Friday morning Thomas was able to see the two pediatric neurosurgeons at the Polenov Clinic. He said that as you enter the building, you didn’t feel any extreme bit of confidence in the surroundings, the typical rundown building that was built to look 50 years old when brand new. You’d have to see structures in to understand completely, but I assure that this happened all the time during communist times. So, Thomas wasn’t sure what he would find in the doctors. Robin and a friend of hers named Nadine accompanied Thomas to translate. To his and then our great delight, the doctors were quite kind and helpful. The doctors said that they would be able to treat Isaiah. They want to see him two times a year. One of the doctors said that in the case of an emergency regarding Isaiah’s shunt, we would be able to call him on his cell phone and he would make all necessary arrangements for the surgery to take place. And some of the most relieving news: If he does need to have a shunt revision, the cost would only be around $1000! That is a fraction of a fraction of the price that such an operation would cost in the States. We are overwhelmed with how God is already providing for Isaiah’s care in . The doctors also said that they could give us information about therapy and other help that Isaiah might need.

Today Thomas was able to meet with two ladies who are language tutors, Galina and Ludmila. (Please forgive me if the “translation” isn’t spelled exactly correctly.) Thomas worked with Galina three years ago and is excited to have the opportunity to learn from her again. He would work with her four days a week for a couple hours at a time. I would work with Ludmila at a beginning level, also for four days a week for two hours at a time. Knowing that we already have language tutors secured makes our future seem much more real and definite. When Thomas told me about our teachers, I got so excited! I’m going to learn Russian! Galina asked Thomas what our goals were in language learning. Thomas told her that he wants to be able to teach and to preach in Russian and that someday I hope to be able to offer counsel and help to other people without having to use a translator. She said that those were both high goals, but certainly possible. Start praying now!

Thomas also said that when they met with the teachers at Ludmila’s home, it was a distance from the center of the city, but the rent is much lower. He said that the ride to the city is very easy, so he is going to talk to the realtor about that area, and Ludmila is going to keep her ears open for any good apartments.

The Lord has continued to show us that this is the way that He has called us to go. Please pray for us as we prepare. Thomas still has some things to take care of before he comes back to us. Of course, we are very excited about his return, too.

Posted by The Slawsons at 1:16 PM No comments:

I love people who love my baby!

I've told Thomas many times that when people show love for Isaiah it only shows what good taste they have. :) Of course, I might be a little partial. But it is amazing how someone who shows care for my child is greatly endeared to me from that point on. I have found myself doing things for Isaiah that I would never take the initiative to do for myself. Who knew?

Today I took Isaiah for an EEG. Last year between Thanksgiving and Christmas (I don't remember exactly when) Isaiah began to have a twitch on the right side of his face. After a little scare that it might be something called "partial complex seizures" that can happen in children with spina bifida, we were reassured by a neurologist that it's most likely something called a hemi-facial twitch that will eventually just go away. To be on the safe side though, as most doctors seem to like to be, she scheduled an EEG and an MRI. So, today I took Isaiah to the old familiar hospital, UMC, and he had 28 sensors put on his cute little head for a 20 minute test. He was actually really good for it.

So back to my original thought...after the test we were able to visit with my friend Guitta. 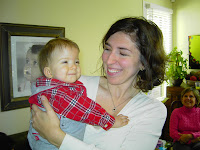 She's really quite grand. I already loved her, but she has taken such a liking to Isaiah that I love her even more. We were able to take a walk in the lovely weather that we're having and then have lunch together. I'm trying to grab every available moment with my friends here before we go. Whenever I take Isaiah to the doctor in Jackson, I try to make arrangements to see at least one friend there. Last time I was able to see my friend Natalie who sang at my wedding (some of you who read this might remember her). 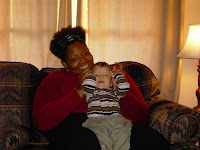 She's also a grand person, with almost too much talent to easily fit in to just the right place. She can always make me laugh with her quick though sometimes quiet humor.

Oh, in case you are wondering, Thomas made it safely to Moscow and I'm assuming to St. Petersburg. He was very tired when I talked to him this morning (late afternoon for him). He said that everything went very well, even the purchasing of 2 train tickets, which he had to do in Russian. He said that he had to do it in a "round about way", but he was able to get the job done.
I miss him.

Posted by The Slawsons at 10:05 PM No comments: 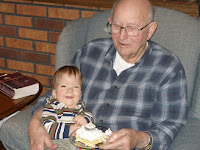 Last Sunday was my grandpa's 85th birthday. My parents gave him a surprise present: Isaiah and me! I thought for sure that Grandpa had figured it out, but I think that we really surprised him! 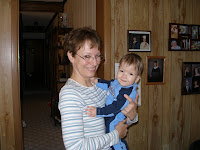 We had so much fun. For the first time Isaiah was able to meet his great aunt Paula and some more cousins. We had quite the family gathering. It was great to see everyone together again.


On the day before his birthday, my parents hosted a drop-in in honor of his birthday. Being able to see how Grandpa has made himself apart of the church community. He always used to go to church with Grandma, and when she passed away, we weren't sure if he would stay committed to going. The Lord has really done a work in his heart! He is in church nearly every Sunday. He has also become friends with other families in the church.

God greatly blessed my heart last weekend as I was able to spend some special time with him and the rest of my family.


Those visits are becoming more and more special as the time draws near for us to go to Russia. Another "marker" is coming up this week. Thomas is traveling to St. Petersburg for about 9 days to do some preliminary work for our move. (For all the thousands :) reading this, please pray for him as he travels and has lots to do!) We are very thankful that an elder from our church is going with him. They'll leave on Tuesday (very, very early) and fly to Moscow. From Moscow they'll take the overnight train to St. Petersburg, arriving on Thursday morning. While they're there Thomas will be meeting with doctors at a special clinic that can treat Isaiah for any emergencies, find an area for us to live, investigate language school and find us a church. Please pray for stamina and wisdom to know what to do when.


Isaiah and I will be spending the weekend in Baton Rouge with Thomas' parents. Besides that Isaiah has physical therapy, occupational therapy, two doctor's appointments and whatever other surprises he decides to throw in. By the way, you would not believe how well he is rolling around these days! I can't leave him alone anywhere.
So, it should be a fun couple of weeks. I know that I'll be able to stay busy while Thomas is gone, but I'm not looking too forward to him being gone for so long. He's not gone yet, but I'll be really glad when he gets back.