skip to main | skip to sidebar

On the Road Again

Friday, June 22 we bid farewell to our time in North Carolina with Cristy's family. While it was hard to say goodbye to her parents, we look forward to seeing them again at the airport on July 17th and 18th when we leave. But we did have to say goodbye to Grandpa for a while, since he won't be making the trip down to Atlanta with them.

We pulled out of Graham about 8:45AM headed for Rutherfordton, North Carolina over on the western half of the state. We arrived about 12:15 and had lunch with my uncle Larry and his family, we visited with them until about 4:30 and then headed over to visit with my uncle Hilmon and family. We ate out that evening and some of our cousins joined us. It was a very good day.

Our next destination would be St. Louis, where we have family and where my grandmother currently stays with my aunt and uncle. Prior to our leaving Graham we had decided that we would drive through the night on Friday to St. Louis (about 11 hours away). We did this for a number of reasons. First of all, we're a little crazy, which pretty much covers it. But we also knew that Isaiah would be a lot better rested. We also knew that we had limited time in St. Louis also, and why waste all that time sleeping when there's family to see right? So we left the restaurant at about 8:45 in the evening, filled up the tank with gas and headed down the road by 9:05.

It was a very peaceful drive. We passed through Ashville, North Carolina, wound (literally) our way through the mountains on in to Knoxville, Tennessee. We then made it on over to Nashville, Isaiah sleeping soundly the whole time. Around Paducah, Kentucky at 4:30AM central time I finally had to get Cristy to drive for about an hour as the two double-shot Starbucks espressos with cream just weren't cutting it any more.

I did sleep for about an hour, and somewhere around the middle-of-nowhere Illinois I took over the wheel again. We rolled into St. Louis and into my aunt's house around 7:30AM central time. Isaiah slept the whole night!

While I wouldn't recommend such insanity for everyone, it really was good for us in our case. Isaiah had never met my grandmother nor my aunt and uncle, and we wanted him to have good quality time with them, so traveling while he slept was a good idea. I nabbed about 4 hours of sleep on Saturday, and did pretty well,

Today we went to church at Ballwin Baptist where my aunt and uncle attend. My aunt was kind enough to put me in touch with one of the pastors ahead of time, and I was able to give a brief spiel about our ministry and mission work, and give our some prayer cards. If any of you good folks from Ballwin are reading this, many thanks for your kind reception this morning!

After the morning service a Russian speaking congregation meets there at the church. We also stayed for that, and I was able to give a short talk (in Tarzan-like Russian) to the very gracious and patient congregation about our plans for moving to St. Petersburg. Though I may have butchered the Tsar's Russian when I spoke it was still a tremendous experience getting to worship with these folks. It excited us tremendously for what lies ahead. My parents and aunt also stayed, which was exciting too. Figuring that they may never get to visit us in church over in St. Petersburg, it was fun to share with them what a real Russian church service is like.

This evening we visited with the cousins, and my parents headed on back to Baton Rouge. Tomorrow morning we'll be leaving bright and early to travel back down that way.

-Thomas
Posted by The Slawsons at 9:42 PM No comments:

It's been a month of exciting adventure for the Slawson family. On Saturday June 2nd we had the big ole yard sale at our old house in Yazoo City, making deals that would make a used care salesman's jaw hit the floor. We were wheeling and dealing left and right. I felt like I was the owner of a store that was going out of business, "Everything must go, down to the bare walls!" We sold almost 80% of our stuff, and the rest we...ahem..."donated" to our church for future youth trip parking lot sales.

While I was working the Arabian Market in our driveway, Cristy, her mom, dad, my sister and brother-in-law were all busy putting the finishing touches on packing up whatever was to go into storage and cleaning up our old house. Cristy's parents left after lunch with a trailer full of stuff to be stored away if we ever move back to the U.S. long-term. My sister and brother-in-law left soon there after with a few things that were going to Baton Rouge. Cristy, Isaiah and I then left our old house in Yazoo City for the last time and went to stay with our pastor and his wife in the manse. Saturday afternoon I relieved some stress by shooting teenagers (and being shot) with a paint ball gun. 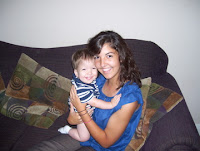 Sunday, June 3rd was a day to prepare ourselves for the final goodbyes. While we are going back to visit one more time on July 1st, we realized that this was one of the last times we were going to see these friends for a long time. The Lord has blessed us with some very close and meaningful relationships in Yazoo City over the years, and it is not going to be easy to let those go.

Monday morning, June 4th we took care of some odds and ends in town and pulled out around 10:30AM headed for Atlanta. We stopped on the way out in Jackson at Lone Star Steakhouse to celebrate our next adventure. Some friends of ours that live just south of Atlanta let us stay at there home (they were out of town). The drive straight from Yazoo City to Graham, North Carolina is about 14 hours. It's nice to break it up. Tuesday morning, June 5th we headed out for Graham, and arrived late afternoon, tired and ready to rest.

Our time here has been a mixed mesh of rest, work, slowing down, being rushed, etc. The Wednesday after we arrived I ran some errands, and Cristy and her mom started sorting through a lot of the stuff we had sent up here to store. We were able to get some rest in that first week though, for which I'm very thankful.

Sunday, June 10th we enjoyed a good day of worship and rest. I taught the combined adult Sunday School classes at Beacon while Cristy spoke to one of the ladies' classes. That evening I preached. The Lord really blessed.

On Monday morning the 11th we headed out for Newport News, Virginia to visit Cristy's Uncle 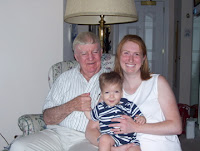 Wallace. You may remember from back last year her Aunt Flo passing away. This was Aunt Flo's husband. We met up with him for lunch and then spent the afternoon visiting with him. We left about 4PM then to head off to Vienna, Virginia (just outside of Washington D.C.) to stay with her Aunt Paula and Uncle Pete. 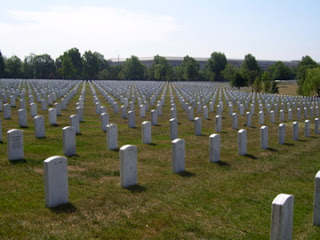 We rested well Monday night, and the next morning Cristy, Isaiah and I headed into D.C. via the metro. We stopped off first at Arlington National Cemetery to see her Aunt Flo's grave. While Cristy had been able to go to her aunt's funeral, she was not able to go to the graveside because it had been held some four weeks later. So this was her first time to see the grave. It was a beautiful day, and the walk through Arlington was very enjoyable for us.

We left Arlington and headed via the metro to downtown D.C. We ate lunch at the Old Post 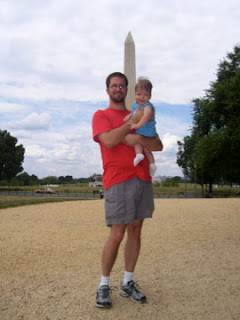 Office Pavilion, and then spent the afternoon meandering around the National Mall, seeing several memorials; the WWII, Korean War, Lincoln, and Vietnam. It was a good day to spend together as a family.

That evening we took the metro back out to Vienna where Cristy's Uncle Pete treated us to a feast of crab legs, shrimp and baby back ribs. We enjoyed the evening together and then hit the sack, exhausted from a day of much walking. We left Vienna Wednesday morning and stopped off to see Cristy's cousins in Fredricksburg and Richmond. We arrived back in Graham at about 5Pm that evening.

Our time since then has been filled with various and sundry things. I have been spending a lot of time doing paperwork, filling out visa forms, working on health insurance, sending out a few more support letters. In the midst of all of this we were thrilled to have another supporting church come on board. What's really interesting is that this church is in California! The whole story of how this came to pass is too long to recount here, so I'll make that another post for another time.

Yesterday (Saturday, June 16th) my friend Seth, who I haven't seen in almost three years, drove down from Delaware. In the afternoon there was a small gathering at the Atkins house as kind of a "goodbye" for us. We enjoyed that, though Cristy was feeling sick most of the day.

Today Cristy is feeling some better but stayed home from church this morning. We all worshiped at Beacon Baptist and had a wonderful time. We just got up from a meal of fried chicken, mashed potatoes, baked beans, and a bunch of other "fixins." Tonight after the evening service at Beacon there'll be a fellowship time for us to say goodbye to everyone up here.

Well, that's the short account of the long story. There's much more to tell, but we don't want to bore you. We'll try to be better about posting more often so that we don't let tons of details pile up.
-Thomas
Posted by The Slawsons at 1:17 PM 1 comment: